History Of The Language

Hebrew is the language in which are written the Bible, known as the Old Testament by Christians, and a portion of the Apocryphal and Pseudepigraphic writings, as well as a great part of later Jewish literature, including the Mishnah.

It is generally assumed that Biblical Hebrew, to the extent that it is linguistically homogeneous, is a close approximation of the language of the Israelite monarchic periods preceding the Babylonian Exile (about 587 B.C.E.), during which time a major portion of Biblical literature was compiled and composed.

The Hebrew Bible is the ultimate foundation of the supreme religious and moral authority for the numerous nations who have professed the Jewish, Christian and Moslem faiths. The moral codes of the Western world have drawn heavily on the ethical teachings of the Bible, particularly 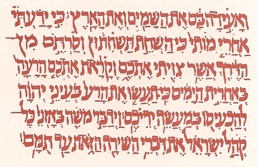 on the concepts of social justice which the prophets so forthrightly and dramatically expressed.